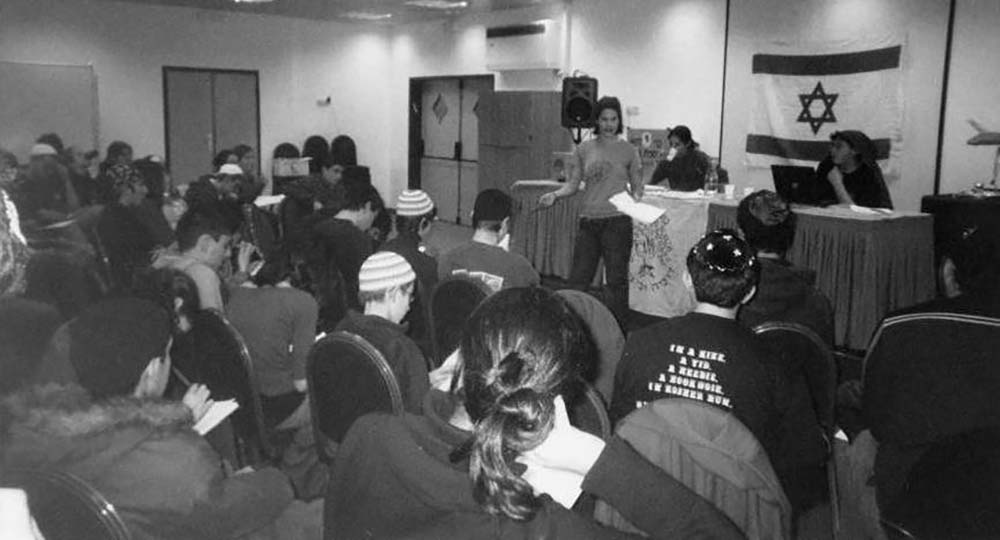 Noam is proud to have a vibrant and dynamic ideology. Debated and decided at our annual conference, Veida, our ideology has 5 branches which can be found below.

The branches were devised at the first ever Noam Veida (annual conference) in the early 1990s and have been added to and revised ever since. The most sweeping changes came at Veidot 2003, 2005 and 2016, at which all five branches were completely rewritten to reflect the members’ views, with the Zionism branch being the focus of the 2016 changes.

i. Noam is the youth movement of Masorti Judaism. We operate in the Halachic framework as laid down by Masorti Rabbis.

ii. Torah and Halacha comprise the backbone of Judaism and we recognise our obligation to follow them.

iii. We also believe Judaism must engage with the challenge of modernity, contemporary scholarship and Moral Imperatives. We all inherit the tradition and believe that it is a living and dynamic system.

iv. We seek to imbibe our members with the knowledge and skills to develop a love for Jewish practice and learning. We aim to provide educational opportunities for all our members such as the opportunities that are offered at the Conservative Yeshiva in Jerusalem.

vi. Noam is an egalitarian Masorti Kehila (community) and believes that men and women are both equally obligated in all areas of Jewish practice.

vii. Noam seeks to be an engaged, literate, questioning, observant, vibrant and caring Kehila, that is the driving force behind the Masorti Community and its future.

viii. Through Noam each member is able to embark upon their own Jewish journey and engage with our own unique tradition.

ix: Noam stands for equal rights of LGBTQ* people. We celebrate the shutafut ceremony and call for it to be available in all Masorti communities. We will put pressure on the wider Masorti movement to develop a halachic and ritual framework for trans (including non-binary) people.

i. Noam believes firmly in the existence of Israel as a Jewish, equal and democratic state. We believe that we have an obligation to build a Jewish state that reflects our beliefs.

ii. Hebrew is the national language of the Jewish People, and we will use it and teach it as much as possible.

iii. Through Aliya, alongside Diaspora activism, Noam can shape a State of Israel based on our values.

v. Noam supports the most viable solution for peace in the Israeli-Palestinian conflict, which we currently believe to be the Two State Solution.

vi. Noam commits to educating about both sides of the conflict, with a view to empowering participants to hold informed debates outside of Noam.

vi. Noam commits to educating about both sides of the conflict, with a view to empowering participants to hold informed debates outside of Noam.

viii. We believe the Israeli government should uphold the ideals set out by the Declaration of Independence, promoting freedom of religion for all.

ix. Noam believes in a Zionism where there is a clearer separation between Synagogue and State.

x. Noam will educate its members about issues of Orthodox hegemony in Israel, and will campaign to end these wherever possible.

xi. Noam encourages its members to visit the Conservative Yeshiva to learn about Masorti Judaism and pluralism.

xii. Noam believes that Israel should respect and accept different religious communities in Israel, and respect other communities outside of Israel.

xiii. Noam believes that civil, same-sex and non-Orthodox Jewish marriages and partnerships, both performed inside and outside of Israel, should be recognised by the Israeli government.

xiv. Judaism holds all life to be sacred. Noam will fight for the human rights and living conditions of all people within Israel and the Palestinian Territories, regardless of faith or ethnicity.

xv. Noam aims to reduce poverty and inequality in Israel and the Palestinian Territories. This must reflect that a disproportionate number of the most vulnerable people in these societies are not Jewish.

xvi. Noam will provide the opportunity for its members to spend time in Israel in order to develop a love for the land, people and culture and religion; we will further foster this relationship in the UK through our machanot and other activities.

i. Noam is an intentional community and strives to welcome and supports the rights of all, regardless of gender, race, socio-economic background, political persuasion, sexual orientation, or ability.

ii. Noam is committed to fighting for racial equality and combatting racism of all forms.

iii. Noam aims to be an intersectional feminist youth movement.

iv. Noam believes in democracy as an effective process for communal decision making. Assefot (on Veida and at other times) are the formalised enactments of this belief.

v. Noam believe in creating an environment in which all members are given a voice in this process.

vi. Noam invites its members to engage regularly with the movement through the events and structures provided throughout the year. The Mazkirut will empower members of Noam to bring about change within the community.

vii. Noam seeks to develop bonds with other Masorti communities across the world. Noam Olami and other individual initiatives will facilitate this.

viii. Noam upholds its right as a community to make autonomous decisions and act upon them.

ix. Noam strives to foster an inclusive and secure environment for all its members. This environment is sustained through active participation and investment in the community.

i. Noam will foster Hagshama Atzmit (self fulfilment) for all of its participants at all Noam events. The process of education is a crucial step towards self-development, thus Noam seeks to include this in all of its endeavours.

ii. Noam aims to be innovative in its education, pushing the boundaries of both formal and informal education, in order to stimulate creative thought.

iii. Noam aims to create a safe and open environment for debate on all issues within a supportive and informal framework.

iv. We aim to promote and foster high standards of Hadracha through training programmes and experience.

v. Noam believes feedback to be a central part of personal growth, and as such will create opportunities for and encourage feedback.

vi. By striving to live out our ideology we aim to become a Dugma Ishit (role model) and an Or L’Tnua (light onto our movement). Positive Dugma is the best way to pass Noam’s ideology onto its members.

vii. Through Hadracha we aim to promote, educate and live out Noam’s other four branches.

viii. Noam is committed to tracking the progress and achievements of all its Madrachim, in order to provide its members with individually focused skills and training throughout their time in the movement.

ix. Noam aims to improve the wellbeing of all its participants through structures such as Atid at all Noam events.

i. Noam believes that every individual and the movement as a whole has the obligation of Gemillut Chasadim (Acts Of Loving Kindness), advancing equality, peace, justice & kindness.

ii. Noam believes that the world is imperfect and that it is the duty of every individual to improve the world around them.

iii. Noam believes that we should end every day having left the world a better place that the one in which we woke up.

iv. As an ideological movement apathy towards injustice is no option and we must always strive to educate to make and informed opinion.

v. Noam values and encourages all Social Action endeavours that its members engage in and support in their daily lives.

vi. Noam should unite its members to fight for causes in order to have a positive impact on our society and the wider world.

vii. Noam believes that practical engagement in Tikkun Olam & Chesed should run alongside Chinuch and Hadracha development. Fostering a safe, inclusive and caring environment for young people are Gemillut Chasidim in themselves.

viii. Noam views all elements of Tikkun as an inherent part of Chesed and will support its members in all tikkun activities.

Get in Touch
Sign up for the Noam Newsletter to stay up to date with all the latest activities, events, and programming happening at Noam!

Masorti Judaism is a registered UK charity No. 117590

We use cookies on our website to give you the most relevant experience by remembering your preferences and repeat visits. By clicking “Accept All”, you consent to the use of ALL the cookies. However, you may visit "Cookie Settings" to provide a controlled consent.
Cookie SettingsAccept All
Manage consent

This website uses cookies to improve your experience while you navigate through the website. Out of these, the cookies that are categorized as necessary are stored on your browser as they are essential for the working of basic functionalities of the website. We also use third-party cookies that help us analyze and understand how you use this website. These cookies will be stored in your browser only with your consent. You also have the option to opt-out of these cookies. But opting out of some of these cookies may affect your browsing experience.
Necessary Always Enabled
Necessary cookies are absolutely essential for the website to function properly. These cookies ensure basic functionalities and security features of the website, anonymously.
Functional
Functional cookies help to perform certain functionalities like sharing the content of the website on social media platforms, collect feedbacks, and other third-party features.
Performance
Performance cookies are used to understand and analyze the key performance indexes of the website which helps in delivering a better user experience for the visitors.
Analytics
Analytical cookies are used to understand how visitors interact with the website. These cookies help provide information on metrics the number of visitors, bounce rate, traffic source, etc.
Advertisement
Advertisement cookies are used to provide visitors with relevant ads and marketing campaigns. These cookies track visitors across websites and collect information to provide customized ads.
Others
Other uncategorized cookies are those that are being analyzed and have not been classified into a category as yet.
SAVE & ACCEPT